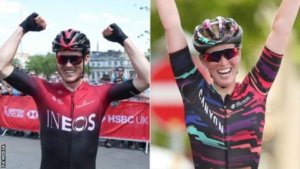 Ben Swift and Alice Barns won their first national race titles thanks to victory at the British Championships that took place in Norwich. Team Ineos rider Swift pushed past leader and fellow team mate Ian Stannard for the final two kilometres and crossed the line first for the men’s race.

Barnes, who rides for Canyon-SRAM, rode ahead of Anna Henderson for the final 200m and won the 136km women’s event. Swift told reporters after the race that it felt good as he has been chasing the win for a number of years, and that he had finished in all the other top five places and he’s really happy to have earned his jersey.

Swift had endured a season that had been laden with a number of crashes, which included a collision with team mate Geraint Thomas while training in February, which had left Swift in intensive care with a ruptured spleen.

The cyclist, who was born in Rotherham, has succeeded his cousin Conor Swift as the national champion, saying that it was a difficult season with the crashes, but he had gotten his motivation and rhythm back after the crash. He added that he owes the win to Ian Stannard, but that they had all gone into the race equally and he had played his card earlier in the race, allowing Swift to bide his time before launching his attack, and that it had ultimately worked out in his favour.