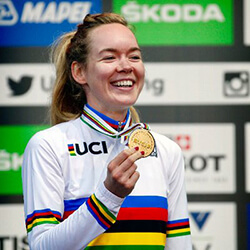 World champion Anna van der Breggen has won Le Fleche Wallonne Feminine for a successive fifth year and now equals the record for the most victories for a one-day race. The 29 year old Dutch rider kicked away for the final 200m of the difficult Mur de Huy climb to win by just one second over Annemiek van Vleuten. With only 3km of the 118.5km course left to go, Floortje Mackaij of Team Subweb made an ambitious solo attack, leading the race on the Mur de Huy, which is a 1.2km climb which features gradients of 26%. Mackaij was eventually taken over by Van der Breggen with only 500m left to go, and despite competition from Katazyna Niewiadoma, Van der Breggen remained calm and took the lead once again.

Five-time champion Marianne Vos, who is also Dutch, finished the race in fourth place. French Julian Alaphilippe, who is 26 years old, successfully defended his title for the men’s part of the race that took place in Belgium. The Deceunink-Quick-Step competitor was intent on chasing down an attack from Jakob Fuglsang, where he passed him in the final 100m before holding off on a late reply from the Dane down the line.

Alaphilippe now has a total of nine victories under his belt from the season, the most of any rider that’s competed in the World Tour, which includes wins from a day one classic Milan-San Remo, as well as Strade Bianche.