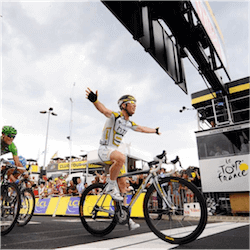 Tem Sunweb has made a great return this year with Warren Barguil claiming the 18th stage of the Tour De France. The rider powered up the mountain top finish to claim his second stage win and adding the fifth stage win for the team this year.

He was followed in a close second place by Romain Bardet who looked like he literally gave it his all. By contrast, Chris Froome from Team Sky finished 20 second behind the race leaders in a very casual 4th place.

It is clear from his relaxed attitude at press conferences afterwards that the cyclist knows the worst is now behind him and his team. The upcoming stage heading to Marseille is, relatively speaking, quite flat with no serious threats to the riders.

Since Froome’s strength has always been the time trials, it is unlikely that either Rigoberto Uran or Romin Bardet will be able to close the ridiculous 29 second gap between them and Froome.

They can only hope for a crash or a puncture to close some of those precious seconds down. Froome has retained the yellow jersey for much of the tour despite his lack of stage wins. He has stated that that is not his goal in the tour. He has so far received fantastic support from his team mates Michal Kwiatkowski and Michel Landa.

Saturday will also most likely see Uran close the gap between him and Bardet to take the second place position. The technical, 14 mile course features one hill and a cauldron finish that should suit Uran just fine.

Saturday is when the riders will be bringing their all to the course. It is unlikely that any of the field will wait to deliver on Sunday. This year was definitely a very taxing Tour De France and seeing what the riders can pull out on Saturday after most have already given their all will be a sight to behold.

What makes it especially mentally taxing is the forgone conclusion of a Froome win. Bardet and Uran will be fighting amongst themselves for the second place finish but Uran needs to make up 6 seconds on Bardet.

Way behind them in the 4th spot in the overall standings is Landa, Aru in 5th behind him, Daniel Martin in 6th with an almost 3 minute deficit and in 7th is Simon Yates, almost 5 minutes behind race leader Froome.