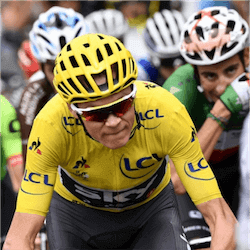 On Thursday night, the British Broadcasting Corporation (BBC) was holding crisis talks to decide on the fate of Chris Froome with regard to the BBC Sports Personality of the Year Awards show set for Sunday night, December 17.

There was no word on a decision from the BBC by early Friday morning, but it was looking less likely that Froome would make his scheduled appearance at the show. The English cyclist was at a training camp in Majorca, but was supposed to make an appearance via live TV link-up during the awards ceremony.

After news broke of his latest doping scandal, however, that appearance looked in jeopardy. Ironically, the show was still on course to feature a musical performance by Noel Gallagher, a man not unknown for his unrepentant use of performance-enhancing drugs…

Sports Personality of the Year Unlikely

Even less likely now than Froome being allowed to appear onscreen at the awards, is the possibility of him scooping the BBC Sports Personality of the Year accolade.

The awards are decided by public vote, and at one point, Froome was fancied by some to win the most coveted of the eight on offer, with online sports betting sites offering odds of $10.00 on the Tour de France star.

Following the news that Froome had failed a drug test for anti-asthma drug Salbutamol in September, and was in danger on having his Vuelta a Espana title stripped, by Friday morning his odds of winning the BBC Sports Personality of the Year had dropped to $50.00 and above.

Nice as it is, the BBC Sports Personality of the Year won’t be what’s weighing heaviest on Froome’s mind right now. He insists his team has evidence that can prove he is innocent, but he’s going to have an uphill battle to clear his name in a sport that has been battling rampant drug-cheating for too long.

As it is, German rival Tony Martin has already called out a double standard by the sport’s governing body. Whereas other riders have been suspended immediately after failing a drug test, even if they later manage to overturn that evidence, Froome’s suspension has been held in abeyance while he and his team answer the charges.

It’s hard to see how the German’s wrong…