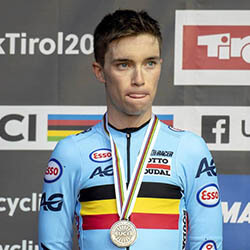 Belgian cyclist Bjorg Lembrecht has passed away at the age of just 22 after a collision while participating in stage three of the Tour de Pologne.

Lembrecht crash took place around 60 miles from the end of the race, which starts from Chorzow and ends in Zabrze in Poland. The cyclist was flown by helicopter to hospital where he died later on Monday.

Lotto-Soudal, the team he was riding for, stated that it was the biggest tragedy possible that could happen to Lambrecht’s family, teammates, and friends. Czeslaw Lang, director of racing, added that it wasn’t a high-speed descent, and that it was a wide and straight road. He added that it had been a moment of hesitation that saw him leave the asphalt before crashing. He continued, saying that the injuries were so severe that they were forced to call in a helicopter along with an ambulance. His heart had started beating but he had sadly died while in surgery.

Lembrecht had been riding in his second season at the top level of professional cycling, and was widely regarded as one of Belgium’s most promising riders.

He won the under-23s’ version of the Liege-Bastogne-Liege race during 2017 and came second in the U23 World Championships last year. German Pascal Ackermann was given the victory for the stage after the win was taken from Fabio Jakobsen for an irregular sprint heading into the finish line.