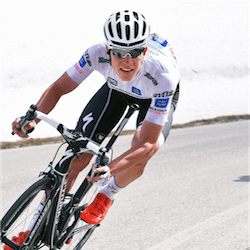 Bob Jungles claimed a momentous victory in stage 15 of the Giro d’Italia after outsprinting Nairo Quintana in a race that saw the peloton riding from Valdengo to Bergamo. Jungles finished up in a time of 4 hours, 16 minutes and 51 seconds. He beat out the Colombian Nairo Quintana who crashed earlier in the stage, which turned out to be one of the fastest in the race history.

Speaking to the press, Jungles said that he was super happy with his victory. He was feeling good in the climbs and had good legs on the day. Despite tiring out in the final climb, Jungles bounced back in the sprint to claim and impressive win. Most of the top riders in the Giro were still recovering from Saturday’s challenging summit finish including race leader Tom Dumoulin who finished in eighth place for stage 15.

In a statement to the press, Dumaoulin said that it was a very fast day. His team had a breakaway at the front but many of the other teams kept attacking. Sunweb’s Dutchman had actually slowed down the peloton in order to allow his race rival, Quintana a chance to regain his position following his crash. Despite his low placing, Dumoulin remains at the top of the overall standing, a full 2 minutes and 41 second ahead of Quintana who recovered well, gaining 6 seconds overall.

Meanwhile, New Zealand rider George Bennet claimed the overall victory at the Tour of California on Saturday. The LottoNL-Jumbo rider finished safely inside the peloton on the final stage to bring home the victory. The win marked Bennet’s first WorldTour classification win and a turning point for the New Zealand cyclist. Bennet was able to complete the race in 22hours, 54min and 38 seconds.

He was just 35 seconds ahead of Poland’s Rafal Majika with American rider Andrew Talansky one second back riding for Cannondale-Drapac. Speaking to the press about his win, Bennet said that it was a massive stepping-stone for bigger things. There is a lot to take from the win including the backing and confidence of his team.