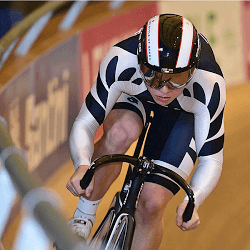 Local New Zealand track cycling star, Bradly Knipe is busy brushing up his skills ahead of the much-anticipated Oceania track cycling championships scheduled to be held in Melbourne next week. The dynamic 17-year-old is only in his first year participating in the elite ranks but has already represented his country in cycling world cup events in the Netherlands and Scotland.  Karl Watson, Knipe’s coach is based in Invercargill and is helping Bradly prepare for championships both on and off the bike.

Watson has a more holistic approach to coaching. He has said that the pair had been looking at ways to improve Bradly’s performance as well as ways to improve him as a person off the bike. This includes training and time management skills. Speaking about the time management training, Watson said they have a press up policy. If Knipe is not 10 minutes early for an appointment, the track star will have to do 10 press ups. If he is on time his coach will do the press ups instead.

Apparently the policy has been benefitting both parties with the coach getting extra fit and Knipe becoming more and more punctual. In terms of New Zealand cycling, the dynamic trio of Simon Van Velthooven, Bradly Knipe and Zac Williams took 10th place in Glasgow and 12th in Apeldoorn but failed to qualify for the first round. Despite having low placings, the team clocked up some impressive times with rides between 45.047 and 45.469 seconds.

Knipe managed to record the second best time in the final leg in the Scotland meet. He also managed to set the fastest times in the Netherlands. Knipe entered the individual sprint in Apeldoorn qualifying in number 27 for the first round. To add to his accomplishments, the junior track cycling world champ gold medallist has represented his country at multiple events overseas.

Knipe will start out competing in the sprint events in the Oceania Champs. According to his coach, going from under-19 to the elite class is a major jump and will certainly be a test for the young rider. The Oceania Track Cycling Championships will take place in Melbourne from December the 7th and run through to December the 10th.