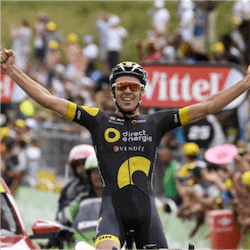 Stage 8 of the Tour De France was finally the race fans had been waiting for. After a relatively reserved race so far, Stage 8 saw the riders get up and power their way along the course with a 50 rider breakaway forming in the early stages of the event.

Fans have blamed the longer stages and the unyielding weather conditions for the lack of fast paced racing but no one can say that this year’s route has been anything but challenging. The field has been put through their paces and the winner of this year’s tour would debatably deserve a war medal for powering through.

To the fans’ delight, Frenchman Lillian Calmejane took the first place finish in stage 8 after he broke away solo on the last ascent of the stage. He was further rewarded with the polka dot King of the Mountains jersey for powering up and down the 187 km between Dole and Station des Rousses.

Calmejane was joined in the winner’s circle by the Dutch rider Robert Gesink from team LottoNL-Jumbo. Gesink stayed on Calmejane, making him work hard for his first place finish. Gesink stated after the race that he saw Calmejane cramp up about 5km from the finish line but he was unable to capitalise as he was cramping up himself. He referred to it quite eloquently as two dead guys fighting each other and the other guy won.

They were joined in third place by Guillaume Martin, but the podium addict Chris Froome remains as big a threat as always and retains his overall race lead by 12 seconds. He is followed in the second overall spot by his team mate Geraint Thomas and in third is Italian Fabio Aru.

This stage followed a very controversial departure of Peter Sagan after an alleged shove during a sprint for the finish in the previous stage. Stage 8 also saw a strikingly poor finish for Arnaud Demare. He controversially claimed a win in Stage 4, but in stage 8 he soon fell behind the breakaway pack, and finished in 188th place.

This followed a very poor sprint to the finish in his previous race which cost him his Green jersey. The riders are certainly taking a knock from this year’s difficult course. If Demare is already showing signs of extreme fatigue, his chances for the rest of the race are looking very slim indeed.