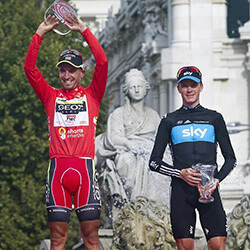 Chris Froome has been named the victor of the 2011 Vuelta a Espana after Juan Jose Cobo’s title was stripped from him following doping irregularities. IT makes him Britain’s first Grand Tour winner in retrospect, an hour that was held by Sir Bradley Wiggins after his victory during the 2012 Tour de France.

Froome now has a total of seven Grand Tour titles under his belt, fourth equal on the all time record list. Despite his new title, Froome will not be attending this year’s Tour de France after a serious crash during a test run in Criterium du Dauphine. His list of victories includes four Tours de France, a Giro d’Italiua, and two Vueltas. He is alongside Italian Fausto Coppi and Spanish Alberto Contador and Miguel Indurian as a seven time Grand Tour winner.

Belgium’s Eddy Merkx is currently leading the way with 11 wins, which is ahead of French Bernard Minault, while fellow French rider Jacques Anquetil has a total of eight from his career.

The Union Cycliste Internationale, which is the governing body of the event, had stated that abnormalities were discovered in Spanish cyclist Cobo’s biological passport from 2009 to 2011. They have imposed a three year period of ineligibility for the 38 year old retired rider, and Froome has been given the title officially since Cobo did not appeal the decision with 30 days of receiving it, while Wiggins has been promoted to second place for the same event.