Contador To Retire After Spain 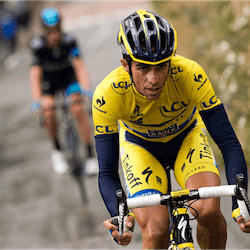 Contador To Retire After Vuelta A Espana

Alberto Contador announced this week that he will be hanging up his shorts following the conclusion of the Vuelta A Espana. He is one of only 6 cyclists that have won all three of the major cycling tour events.

He did so in an amazing 14 year career that was only hampered by a doping ban he received. Despite this the 34 year old still holds 7 Grand Tour wins and an impressive legacy for his country.

“El Pistolero” as he is affectionately known chose to make his final race in his home country, making the Vuelta A Espana the ideal finish for this cyclist.

Bardet Signing Up For Vuelta A Espana

Frenchman Romain Bardet has announced that he will indeed be joining the Vuelta A Espana this year, claiming he wishes to break the monotony of his regular schedule.

This means he will be reuniting with his Tour De France rivals, Froome and Aru. Bardet finished in third place in the Tour and it seems he still has some scores to settle.

He has also publically stated that he will have different goals in the Spanish Tour than he did for the Tour De France and will be aiming to focus on making strong finishes in the stages that play to his strengths.

Froome Warms Up Before Tour

Tour De France champ Chris Froome is currently still in France. The cyclist is doing some altitude training while also recovering in Chatel in France. He is also appearing in some special criteruim races in the Netherlands and Kazakhstan in between.

These races will definitely ensure that Froome is in top form when he meets many of his rivals again in the Tour of Spain event.

Adam Hansen will make a record breaking 19th consecutive tour appearance this year at the Vuelta A Espana. The cyclist was set to miss the tour thanks to a saddle sore and was set to take a much needed break after cycling 18 consecutive tours.

However the cycling team Lotto-Soudal have approached the veteran and asked that he replace  Rafael Valls who managed to break his hip during a crash while training. The team is also still reeling after the loss of Louis Vervaeke, Jurgen Roelandts and Frederik Frison.

Kicking off the 19th August, the Vuelta A Espana will start with a 13.7km team trial in Nimes. Two more stages are set to take place in France before the cyclist head into Spain on the 22nd.

Most fans would ideally not like to see a repeat of the Tour De France which was essentially a Froome domination.