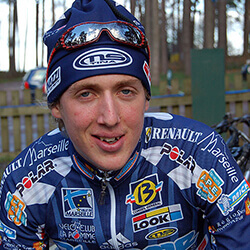 Ireland’s Dan Martin celebrates after his win at the sixth stage of the Tour de France. The rider, who is part of the UAE team, gained the upper hand on the Mur de Bretagne climb, managing to grab victory for the race.

Greg van Avermaet of BMC finished just behind Martin, and has retained the yellow jersey that he received at the beginning of the famous cycling event. Van Avermaet is currently leading ahead of British Gertaint Thomas, who is riding for Sky, with Tejay van Garderen of BMC not far behind. Following is France’s Julian Alaphilippe of Quick Step, who finished seconds after Van Avermaet.

The last scramble of the sixth stage saw Martin break free from the other leads of the pack during the final 1km of the race, and beat out his biggest rival Chris Froome by eight seconds. Long behind them was Romain Bardet of AG2R, who finished a total of 31 seconds behind Martin, setting the team back substantially. Tom Dumoulin of Sunweb, and champion of the 2017 Giro d’Italia, saw the biggest blow after completing the event almost an entire minute behind Martin.

The main group of five leaders pulled away relatively early into the 181 km event, which ran from Brest to Mur de Bretagne. Alaphilippe of Quickstep broke away as they entered the last 100km, which split the leaders down the middle. Mikel Landa and Nairo Quintana, who both lost serious ground, had to work hard to find their way back to the leader group.