Fabio Aru out of the Giro d’Italia Due To Injury 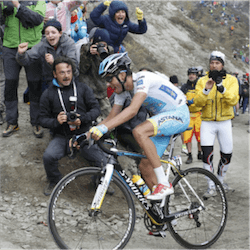 Fabio Aru out of Giro d’Italia

Italian cycling sensation, Fabio Aru will not be taking part in the 2017 Giro d’Italia. This was the announcement made by the Astana team following reports of a knee injury. The 26-year old Italian picked up podium finish in 2014 as well as 2015 but will not get a chance to compete this year. As one of the top favourites for the Giro d’Italia, Aru’s injury is a major setback for the team.

In a team statement sent to the press, Aru described his disappointment in missing out on the race. Fabio said he had been dreaming of Giro from his Sardinia and had been preparing for the race for the past few months. Once the accident occurred, it made him miss the start of sufficient conditions for the race. The team said that it was with great regret that they will have to miss out.

Aru suffered a crash on the 2nd of April during training in Spain. According to the Astana team, he was taken to Milan where he was diagnosed with pre-patellar bursitis. This is a condition that causes the rider a lot of pain while racing. Aru has been ordered to take a full 10 days of the bike before coming back for an evaluation. The injury to one of their top riders leaves the Astana team with a few interesting options for the Giro, which gets underway on the 5th of May.

This year the Kazakhstan team will be in full support of Michele Scarpone who picked up the 2011 title after Alberto Contador was stripped of his title. In a brief statement to the press, the Astana team said that they decided to go with Michele Scarponi as their leader for the Giro. He will come into to replace Fabio Aru who is forced to skip the race as he recovers from his knee injury.

Unfortunately for Fabio, he won’t be able to start in his home race. While the team is certainly disappointed, the Italian’s full recovery is top priority and must go ahead at all costs. Aru has to complete his full recovery treatment before he can be considered for an upcoming race. His racing calendar will completely depend on the timing of his recovery and his results in the early races.