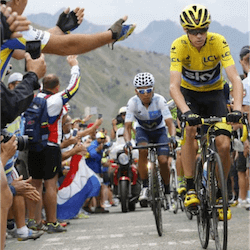 By a very narrow margin, Chris Froome is retaining his yellow jersey as the 165km leg from Le Puy en Velay to Romans sur Isere kicks off today. This year is an incredibly tight race with only 29 seconds separating the top 4 riders, piling on the pressure.

Monday saw the riders taking their final rest day before the punishing last stretch ahead of the final race Sunday ending at the Champs Elysee.

The Pack So Far

Froome is still the tour leader with a 18 second lead over next in line, Fabio Aru. Romain Bardet is the third place rider just 5 seconds behind Aru.

Froome’s lead was seriously in danger during the 15th stage of the tour when he encountered mechanical issues with his bike. He had to do an emergency swop of his rear wheel on the track with his team mate Michal Kwiatkowski.

The rider broke a spoke on his wheel 40km from the finish line heading into the steep climb of the Col de Peyra Taillade. Bardet and AG2R were hot on their tail and set an amazing pace in their climb.

This placed Froome and Team Sky under a lot of pressure. They had to lead by the end of the climb or Froome may have lost his yellow jersey. He already lost the jersey for two stages after Aru claimed it when Froome failed to power through the final climb of stage 12. He soon reclaimed it on stage 14.

With the final six stages ahead of them, with a draining summit finish on Thursday and a taxing time trial on Saturday, there are still hard times ahead.

Coming Up In 5th Place

Meanwhile the 5th place Irishman, Dan Martin is taking things a bit more relaxed. 72 seconds behind race leader Froome, Martin thinks of the Tour De France as “just another bike race”. Martin thinks it is important to not let the name and image of the Tour overshadow the fact that at the end of the day you should be having fun competing and not taking events too seriously.

This attitude has really assisted the rider who is still recovering from a major crash on the Mont du Chat during the 9th stage of the Tour. Martin still requires daily work on his back to contain muscle spasms but he retains his sunny outlook.