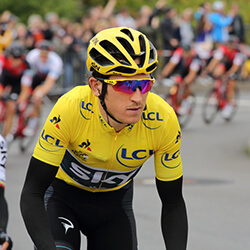 Talking about his preparations and the race, Thomas has said that he would love tow in it again, and that he’s not far from the shape that he was in for the previous Tour de France.

After he became the third British rider to see victory in the Tour, after Chris Froome and Bradley Wiggins, Thomas started training at the end of November, which was three weeks later than in the previous year. Stomach problems forced the rider for Team Sky out of the Tirenno-Adriatico, which took place in March, and he then had to retire from a training camp in Tenerife due to worsening weather conditions.

But recently Thomas competed inn the Tour of the Basque Country, and is planning on stepping up his preparations for the Tour de France de Romandie what takes place from the end of April to the beginning of May. He also expects that three-time winner Chris Froome will be his biggest rivals during thee Tour this year, along with fellow team-mate Egan Bernal.