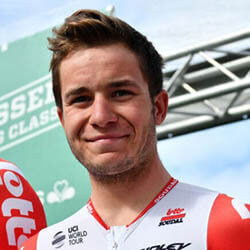 Belgium’s Gerben Thijssen has been moved to intensive care after sustaining an injury during a bad collision for the first night of racing at the Ghent Day Six. The Lotto Soudal rider, who is 21 years old, suffered three small brain haemorrhages, as well as three fractured ribs and a collarbone. He will receive more examinations and is expected to remain in intensive care for a number of days. Talking about his condition, team spokesperson Philippe Martens said that Gerben remained conscious at all times, and at the moment his condition is stable.

Thijssen had crashed during the last lap of the supersprint after he made contact with Denmark’s Oliver Wulff Frederiksen. He was immediately attended to on the track, and, after a request from the other riders, the event was ultimately drawn to a close due to the crash. British Mark Cavendish, who had won the event with Bradley Wiggins in 2016, had also crashed during their one lap time trial.

The 34 year old, who had partnered with event time winner Iljo Keisse for this year’s season, did not receive any serious injuries, but was nevertheless forced to withdraw from the remainder of the racing for that day. After the first day had come to an end, Jules Hesters, along with Otto Vergarde currently lead the team with 46 points in total, which is one point ahead of the runners up from last year’s 2018 season, Kenny de Ketele and Robbe Ghys.