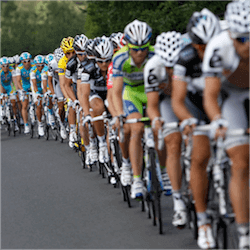 An emotional Marcel Kittel sprinted to finish first during the second stage of the Tour De France. He managed to rush ahead of his fellow German Andre Greipel and French powerhouse Arnaud Demare.

The rider received a 10 second time bonus for winning the second stage and he is currently ranked 3rd in the overall rankings, but still a tough 6 seconds behind the second place rider, Geraint Thomas from Britain.

Unfortunately for all the powerful sprinters in field, the race kicks of stage 3 on Monday morning where sped will not be everything. This section of the course features a 212.5 Km section which enters France from Germany. The section finishes with an uphill climb that will put a lot of pressure on the sprinters.

An In Race Spill

British cyclist and defending champion, Chris Froome, met a bit of bad luck in the wet conditions the cyclists faced. He crashed 30km into the race thanks to an errant pylon  but amazingly did not sacrifice the advantage he had built up during stage 1. He received excellent assistance from his team with Michal Kwiatkowski assisting Froome with recovering and getting a replacement bike.

Froome is currently ranked 6th with an incredible 35 second lead on Richard Porte and 36 over Nairo Quintana, his closest main rivals. This more than likely will signal clear sailing for Froome in the rest of the Tour.

Fellow Brit, Mark Cavendish took the fourth place spot while Geraint Thomas still retained the Yellow jersey for Team Sky even after he joined Froome in his tumble on the track. Cavendish himself had some extra walls to climb as he achieved his 4th place spot while recovering from Glandular Fever.

Australian cyclist, Michael Matthews finished in the 9th spot on the stage 2 race. This is quite a significant race for the rider as this will be his first Tour De France with his new team, SunWeb.

He left Orica- Scott recently and the 26 year old looks in much better form. He will finally be having a team who pulls behind him instead of the much reported rivalry he faced at Orica with former teammate Simon Gerrans.

The Australian placed 16th at his opening time trial and as the Tour goes on he seems to be getting stronger and stronger with a new found confidence.

It is still early stages in the Tour and so far there are not many shocks in the field. Froome and co seem set to be a dominating force in this year’s event and will make for solid betting while Germany seems to be attempting to punch into the top.