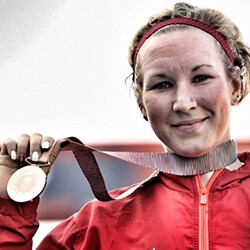 British Hayley Simmonds overcame her anxiety to win bronze for the women’s cycling time trial for the European Games. The 30-year-old cyclist, who is a bronze medallist from last year’s Commonwealth Games managed to edge out teammate and fourth placed Alice Barnes by 0.81 seconds. Swiss Marlen Reusser won in 36 minutes and 17.41 seconds, with Chantal Blaak taking second place.

Talking about her win, Simmonds stated that she was just happy to finish on the podium, and that she gets really bad race nerves and anxiety so she just tried to keep herself calm throughout the race and tried to remember how she felt at the Commonwealth Games.

Overall, the British had a successful day of five multi-sport events, with triumphs in a number of different areas. Calum French, Luke McCormack, Cheavon Clark, and Ben Whittaker all won in their boxing categories, while Aqeel Ahmed lost on a split decision.

For the water events, Tom Lust came in third out on the regatta course and has qualified for the men’s K1 1000m final, while women’s C2 500m pair Katie Reid and Chloe Bracewell pushed past a race delay and lane change for the semi finals to finish in second place and have progressed to the final.

Elsewhere, the British badminton team won their second match for the group stage, and Corey Walkes just missed out on a place in the individual trampoline competition event by a slim margin.