Kiwi Rider Toughs It Out At Tour de 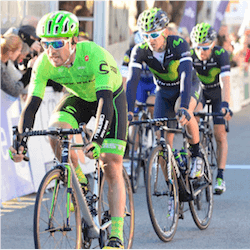 If you have been following the Tour de France closely, Chris Froome is a name that would have come up more often than not. This year, the Tour de France came to a dramatic close with Chris Froome claiming his fourth win in the overall category in just five years. But for New Zealand cycling fans, Patrick Bevin is more of a hero. The reason for this is because Bevin completed his debut Tour de France with a broken foot for most of the 21-stage race.

After crashing in the opening stage on the 1st of July in Dusseldorf, Bevin broke a bone in his foot but decided to complete the tour anyway. For the rest of the race, Bevin rode in discomfort, helping fellow Cannondale-Drapac teammate Rigoberto Uran take home second place in the overall category, just 54 seconds behind Froome.

On the final day of the race, Bevin crossed the line in Paris along with fellow first-timer Dion Smith and more experienced kiwi rider Jack Bauer. The 103km final stage was won by Dutch rider Dylan Groenewegen. Just before the final stage, Bevin posted a picture of an x-ray of his broken foot on Twitter. He tweeted saying that it was just a reminder of the Dusseldorf incident that has followed him every pedal stroke of the race since.

A Good Year for New Zealand

The 26-year-old placed 114th in the race while Dion Smith, the Wanty-Groupe Gobert rider placed 124th after featuring in a breakaway on the final stage. Of the New Zealand riders, Bauer was the most successful, placing 105th overall. Bauer was one of the key riders in early on in the race. He played the role of the leadout rider for Quickstep Floors teammate Marcel Kittel who won five individual stages of this this year. In the penultimate time trial on Saturday, Bauer also picked up 11th place.

Of the four New Zealand riders that entered the Tour de France, George Bennet was the only rider who failed to finish. Bennet was holding onto 12 place overall; the best ever result for a New Zealand rider until the end of stage 15. Unfortunately for Bennet, he fell ill and had to pull out of the race altogether. The LottoNL-Jumbo rider was among 29 cyclists from the original group of 198 who did not finish the even.