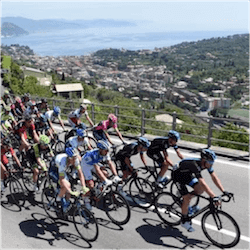 The Giro d’Italia has added a new prize category to the upcoming 2017 edition of the race. Celebrating its 100th edition, the Giro d’Italia will see the incorporation of the Pirelli Premio Miglior Discesista. This new category will be a contest for the fastest descender over ten different segments including the Passo dello Stelvio, the highest peak of the race. While the news of an additional prize may be good for some, the director of the ANAPRC rider’s organisation has been lobbying for rider safety and feels the competition is irresponsible.

This year, the organisers of the Giro d’Italia have picked ten segments from stages 8 to 20 for the selected competition. They will award the fastest rider through each segment a prize of €500. According to the official rule book, the rider’s times will be recorded for each of the downhill stretches. This includes:

How the Points Will Work

In the Pirelli Premio Miglior Discesista descending competition, the top five fastest times in each segment will be awarded a specific number of points from 8 points down to 1 point. At the end of the Giro d’Italia race, the rider with the most points will win the top prize of €5000 while the second placed rider will receive €3000 and third place €2000. The winner of the new descending competition will actually earn the same amount of money as the winner of the mountains classification for the overall best climber.

Most of the descending segments will come about in the early to middle stage of each section. However, on stage 11 and a few others, the descending challenge will coincide with the push for the stage victory. Stage 11, Monte Fumaiolo starts the day with a descending segment. At this point the riders have just 25.2 kilometres left in the stage. Similarly, on stage 15, the Selvino decent starts off with online 28.2km to go.  On stage 16, the Stelvio sees the riders descend from the Cima Coppi, the highest point of the race. It comes just before the Umbrailpass and the exciting downhill finish in Borimo.