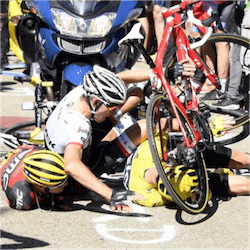 After a great Tour De France run, Australian cyclist Richard Porte has been unceremoniously eliminated from the event in Stage 9.  He had a terrible crash during a steep descent while he was in a solid 5th place. His bicycle slipped on the tarmac and into a crass verge at the end of the descent.

The unbalanced rider then wobbled across the road taking out Dan Martin from Ireland in the process.  Both riders crashed onto rocks a mere 25km from the finish line. It seems this 181km stage took the concentration from Ponte as he made his rapid descent and the rider certainly paid for it.

Porte was conscious and could speak but fans saw that the rider did not move after the crash. He was evacuated from the track and taken to hospital as soon as was possible.

As if this was not enough of a loss, British cyclist Geraint Thomas suffered a similar fate 100km’s earlier.  He had his crash also at the bottom of a steep descent near the Col de la Biche. It was announced that he has also been removed from the tour after the crash left him with a broken collarbone.

This was Thomas’s third crash so far. He has had an amazing run this tour spending 4 days in the coveted Yellow jersey. This was actually his second race ending crash this year after he had to leave the Giro de Italia following a crash involving a police motorbike.

These events have been a doubled edged sword for the star of Team Sky, Chris Froome. The exit of Porte takes a lot of pressure of Froome as the Australian was one of his main rivals. It did however cost him his team mate who was 2nd in the overall rankings.

There were many other crashes amongst riders, notably Alberto Contador who amazingly managed to mount his bike again and carry on. Dan Martin, who was also knocked down by the crashing Porte, also managed to compose himself and carry on but he did take a second tumble.

This has been a very taxing weekend for the field and fans are now unsure what the rest of the race holds with the loss of these key competitors. It will most likely be a huge blow for Team Sky who has had a dominating run in the Tour so far.

Porte was a powerful force in his team, keeping them in high spirits, while Thomas was always at Froome’s side supporting him. Let’s hope for the fans that these sides can keep their minds on the task at hand.