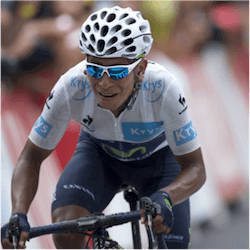 Cycling fans in South America are holding their breath for the coming Tour De France. The country has a serious chance to make a historic showing at this year’s event thanks to Colombian, Nairo Quintana.

The 27 year old hope for South America has had a great season so far. He has finished in the top three positions in his last 3 races meaning he may be gearing up for a fantastic Tour De France.

He also has his history at the Tour to fall back on for any critics. When he debuted in his first Tour De France in 2013 he won a stage and received a king of the mountains jersey while he was gunning for his 2nd place finish. He even challenged Chris Froome in the Alpe D’Huez at the 2015 Tour De France.

To many fans’ surprise and delight, Quintana attempted the Giro De Italia this year and finished in the 2nd place spot just behind Tom Dumoulin. Quintana rides for the Movistar team and he is supported notably by Alejandro Valverde. This will be the 34th appearance by Movistar at the Tour De France. They have claimed 7 overall victories, 73 yellow jerseys, 31 stage victories and 10 other victories in other classes.

The team will have a lot of pressure from the other riders but for Quintana his biggest threat is Chris Froome. Using the mountains to his advantage could have been a great tactic for Quintana but this year’s relatively atypical course may count against him since he does his best work in hilly terrain.

He is considered one of the best climbers in the world of cycling with Chris Froome probably being the only rider able to go toe to toe with him. He will be gaining some advantage this year thanks to there being less emphasis on time trailing which cost Quintana 2 minutes over 37 Km’s last year.

The Track This Year

This year’s tour will conclude with a time trial vent rather than the usual summit finish. The final race will be a 23km stretch, which may be too short for many riders to capitalise on. The prologue of the Tour will start with a 13km stretch in Dusseldorf.