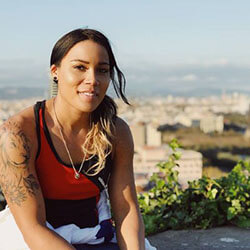 Kenny, the 2016 Olympic keirin champion, sat up a lap too early in his heat, and then had to race in the repêchage. Talking bout the error, Kenny said that he didn’t think it was the last lap, and that he thought he had heard the ball, adding that he doesn’t know if someone had maybe dropped a spanner, but as he was at the back he reacted immediately.

Kenny managed to get through the extra lap to reach the final, and provided a sprint finish to beat Jack Carlin to the line. Reade, who won her first team sprint world titles in 2007 and 2008 with Victoria Pendleton has also won four BMX world titles. Talking about the National Track Championship, Reade said that it was her first national title in any discipline, and that it means a lot to her to get the collection of world and European jerseys.

Reade had initially retired after failing to make it into the 2016 Rio Team, but returned to her training, and has been hard at work for the last four months. Her racing partner, Ridge-Davis, became the first British rider to win the junior women’s BMX title in Europe since Reade in 2006, with Reade saying that Ridge-Davis has real start quality, and that she will be going all the way.