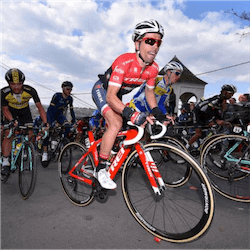 Team Trek has had to make a last minute rider replacement after a doping incident came to light. Andre Cardoso was suspended from the team on Tuesday after the UCI revealed that the 32 year old cyclist failed a drug test. The test was done for an out of competition event and was found positive for the banned substance EPO.

The cyclist was going to be competing in his first ever Tour De France event. He has previously performed very well in other cycling events, securing top 20 finishes at the Vuelta Espana and the Giro de’ Italia. The rider tested positive on the 18th of June for the banned substance, which acts as a blood booster.

Team Trek has now filled the spot of Cardoso with the 40 year old Haimar Zubeldia. The Spanish racer is a veteran of the Tour and he is known for his powerful climbing, which will definitely be of use in this year’s hill and mountain dominated route.

This is Zubeldia’s 16th Tour de France. He has finished in the top 10 cyclists on the Tour De France in 5 separate occasions with a 4th place finish his career best.

Fans are looking forward to the team’s performance at this year’s event, despite the loss of their team mate under such terrible circumstances, but critics on the other hand think this could be team leader, Alberto Contador’s last chance to claim a tour victory for his team.

The team generally fares less well in the mountains and they cannot stay as competitive as for instance Movistar or the British Sky team, but Contador is a powerful lead and the addition of Zubeldia could make them that much more competitive on the mountains.

A Legacy To Defend

Team Trek is relatively new in the tour, having only started competing in 2011, but they have already claimed the 6th place in the UCI rankings.

In that short span, Alberto Contador has claimed two wins for his side. Fabian Cancellara has been the yellow jersey leader and also led the tour in the 2012 Tour De France.

Alberto Contador only has his age that counts against him. Looking at the rest of his immediate competition, consisting of Chris Froome, Richard Porte and Nairo Quintana , he may be in the best position of his career to make his team and himself proud.