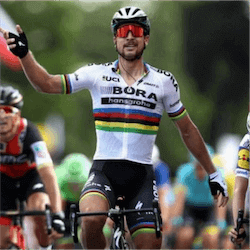 Peter Sagan managed to win the thirds stage of the Tour De France making it his 8th stage win at the Tour in his career. The cyclist did experience a technical issue just before the finish line when his foot became unclipped from his pedal but the seasoned professional managed to not lose his focus and sailed to victory.

Team Sky’s Geraint Thomas held on to the yellow race leader jersey despite finishing 8th and 2 second behind the flying Sagan. Froome finished in 9th place, so a quite low finish for the British team but they have been firing on all cylinders so far in the tour.

Froome alone managed to go from 6th overall to second overall. In the second place position on stage 3 was the Australian rider Michael Matthews joined in third place by Dan Martin. Matthews is currently ranked third overall, just behind Froome.

Sagan Skilled In The Hills

Sagan’s power and endurance in mountainous terrain served him very well in this leg of the Tour De France. The third stage ended with a 1.6km uphill finish which is why Sagan’s unclipped pedal buckle was such a potentially disastrous turn.

Sagan received 50 points for this win and he could potentially take the Green Jersey for sprinters. If his record is anything to go by it will be his as he has won the coveted green in his last 5 Tour De France events.

Marcel Kittel who took the second stage victory is also in the running for the green and he will be looking forward to stage 4 today which is one of the few stages that will favour the sprinters in the field since most of this year’s course is quite uphill.

American Nathan Brown surprised his team mate Taylor Phinney by claiming the King of the Mountain polka dot jersey from him. Both cyclists were in competition for it but in the end Brown’s determination paid off.

Richie Porte surprised many by seemingly misjudging the finish line and started sprinting with 800m left to go. He triggered the attention of Sagan who simply followed suit until he realised how much of the race was still left. Unfortunately by that time it seems Ponte was spent and he ended up with a 14th place finish, but only 2 seconds behind.

Things are certainly starting to heat up as we reach the midway mark for the tour. Team Sky seems to be having an off day today but they never remain down for too long. Today was a great victory for Peter Sagan who deserves all the laureates he receives.