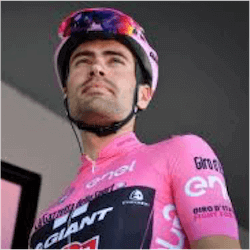 Tom Dumoulin made history on Sunday, becoming the first Dutch cyclist to win the Giro d’Italia (Italian Grand Tour) in the 100th edition of the race. The final stage of the Giro d’Itali was set out as a 29.3km time trial from Monza racetrack to the magnificent Duomo Cathedral in Milan. Sunweb team Leader, Dumoulin went into the final stage just 53 second behind Colombian Nario Quintana. Dumoulin had led the race for a full nine stages before losing the pink jersey to Quintana on stage 19.

The Dutch rider had a fantastic race, managing to secure a second-place finish in the final stage behind compatriot Jos van Emden to claim his first grand tour victory, 31 second ahead of Quintana. The 2014 Movistar rider finished in second place overall with Italian Vincenzo Nibali finishing in third. Quintana failed in his bid to challenge for the illusive Giro-Tour de France double, a claim he had made before the race began. Meanwhile French rider Thibaut Pinot who was in contention for the overall victory, finished fourth overall with a disappointing race against the clock in the final stage.

Dumoulin, who finished just 17 seconds behind Van Emden had a nervous wait, watching Quintana complete the final few kilometres into Milan. When the calculations were made showing that the Colombian would fall short of his time, Dumoulin jumped for joy. Speaking to the press, he said that he felt like it was a dream. When he crossed the line, people were telling him he had won the race. Dumoulin said he could never have imagined the result, everything just fell into place for him. He also praised the performance of Quintana, saying he was amazing in the race.

The Colombian’s team responded on Twitter saying that in fact the best man won. Jos van Emden gave the Netherlands even more reason to celebrate with a maiden grand tour stage win into the Lombardy capital. Van Emden was understandably emotional after the race. He said that he had come in second too many times and taking the win was a great day for Dutch cycling.  He went on to say that with Tom winning the overall race and him claiming the stage win, there were two very happy riders inside the tent.