The Vuelta a Espana Cycle Tour 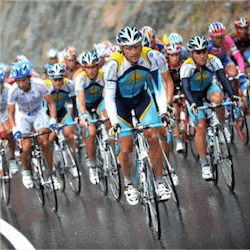 Gearing Up for the Vuelta A Espana

Originally inspired by the Giro d’Italia and the Tour de France, the Vuelta a Espana was first run in 1935 and was initiated with the help of sponsorship from the daily Spanish newspaper Informaciones.

Today the Vuelta a Espana, or Tour of Spain is one of the most respected races on the UCI World Tour. It is a road cycling race that will stretch a little over 3297Km in 2017. It will be running from August the 19th to Sunday September 10th.

There will be 21 stages interspersed with 2 rest days. The 21 stages are split into:

Spanish riders have generally dominated the Vuelta, with 30 of the 66 events held so far won by a Spanish rider, notably Nairo Quintana won the event in 2016 and he may try and recapture his success this year after failing to set the Tour De France on fire.

Three time runner up, Chris Froome has already confirmed his attendance of the Vuelta a Espana after he clinched his fourth Tour De France win last week. He will be the first ever Brit to win the race if he manages to power to the top spot.

So far the official race list for the tour has not been released. Many riders from the Tour De France move on to the Espana and at the moment most teams are assessing their fitness and energy levels as well.

Most likely Froome will be joined by his rivals Romain Bardet, Fabia Aru, Rigoberto Uran and Alberto Contador who is a veteran of the Vuelta a Espana and 3 time former champion.

Giro de Italia cyclists Vincenzo Nibali and Ilnur Zakarin have also confirmed their interest in taking part this year but Tom Dumoulin, Alejandro Valverde  and most surprisingly defending champion Nairo Quintana will not be competing this year, much to the disappointment of fans. Currently Quintana is still nursing injuries he attained during the crash filled Tour De France.