Vuelta A Espana to Feature Aru 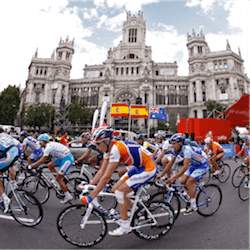 One of the main contenders for the Tour de France, Fabio Aru, will be facing many of his rivals once again in this year’s Vuelta A Espana. The Italian cyclist has been selected as the team lead for Astana in the event. He will be joined by team mates Miguel Angel Lopez, Pello Bilboa and Luis Leon Sanchez.

The team is ready for the Vuelta A Espana after they managed a relatively disappointing 5th in the Tour De France. Aru has overcome many challenges in the Tour and he has commented that the 5th place position to him is a glass half full situation.

His actual disappointment came in April when a nasty crash during his training sessions cost him a chance to compete in the Giro ‘de Italia which kicked off in his home town of Sardinia.

Bronchitis cost Aru the chance to be at his most competitive in the Tour De France and fans are hoping that being back in a more familiar climate will give Aru more of an edge. Aru is no stranger to the Vuelta Espana, the cyclist won an overall victory in the 2015 event but did not compete in 2016 due to his preparation for the Olympics and the Tour De France.

Miguel Angel Lopez’s last notable win was in the Tour of Austria where he finished in the third overall position in July. Before that however a series of unfortunate crashes plagued the rider.

In the 2016 Vuelta A Espana the Colombian cyclist came down in the 3rd stage losing three of his teeth, he still managed to cycle for three more stages before abandoning the race.

At the Tour de Suisse where he won a previous victory, Lopez crashed again, walking away with a broken thumb.

Aru’s other two team mates, Pello Bilboa and Luis Leon Sanchez, were part of the 8 man team that represented Astana at the Giro d’Italia this year without the injured Aru. They did not make any notable stage wins but Sanchez was awarded the special Cima Scarponi prize for making it past the Mortirolo first.

Heading into the Vuelta A Espana that kicks off trials in mid August, Sanchez and Bilbao are taking part in other Grand Tour events. Sanchez is enlisted in the Tour de Pologne and Bilboa is scheduled for the Vuelta a Burgos along with teammate Lopez.