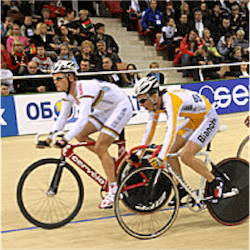 Hong Kong has been chosen by world cycling body UCI to host the 2017 UCI Track Cycling World Championships, the final event of the 2016-17 track cycling season, from April 12-16. It is only the second time in 124 years an Asian country has hosted the tournament; on the first occasion, Japan was the host in 1990.

The team will be determined to improve on that record, come April, on the 250-metre track of the 3,000-seat Hong Kong Velodrome. Before then, however, New Zealand still has a few ambitions to fulfil in the 2016-17 UCI Track Cycling World Cup, when the final round takes place in Los Angeles’ Velo Sports Center on February 25 and 26.

The first two rounds of the 2016-17 World Cup were held in Glasgow, Scotland and Apeldoorn, the Netherlands in November. The third round, from February 17-19, was in Cali, Colombia.

The women’s team pursuit squad missed a bronze medal by 0.7s in Cali, so they are ready to take it up a notch in Los Angeles. Mitchell, Webster and Dawkins are still strong contenders in the World Cup final round, despite being medal-less so far this tournament. They will also likely be back to defend their 2016 Team Sprint championship in Hong Kong with all they’ve got.

Punters looking for an overall winner of the 2017 World Track Championships, on the other hand, will probably choose between Great Britain, on 11715.0 points at the end of Round 2, or France, close behind on 9855.0 points. Either side looks good to take the World Cup overall, and both will be hard to beat in Hong Kong, too.