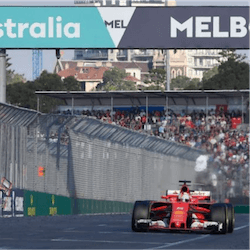 For Sebastian Vettel, winning the Australian Grand Prix on Sunday was more than a personal triumph. It was also a signal that Scuderia Ferrari has the team and the machines to mount a serious challenge against Mercedes AMG Petronas this year. After three years of Mercedes being practically unbeatable, Formula 1 fans can finally expect a championship filled with close competition.

Held on a street circuit created around Melbourne’s Albert Park, the Australian Grand Prix is one of the oldest in the world, and is the first of 20 races in the 2017 Formula 1 World Championship. The German driver won in one hour, 24 minutes, 11.672 seconds; fully 9.975 seconds ahead of Britain’s Lewis Hamilton, who finished second for Mercedes.

Valtteri Bottas, Hamilton’s Finnish teammate, took third, with fellow Finn Kimi Raikkonen, Vettel’s Ferrari teammate, coming fourth. Max Verstappen kept the Red Bull Racing-Tag Heuer team in the running with a fifth place, although the young Dutchman may do much better on circuits where passing is less of a problem.

It is significant that Hamilton started the Australian Grand Prix in pole position, after posting a top lap time of one minute, 22.188 seconds in the qualifiers. Vettel was second on the grid, and might have remained in that position for the entire race, were it not for some canny pit-stop decisions.

Several drivers, including Hamilton, have pointed out that the aerodynamics of the latest cars makes passing almost impossible on certain circuits. Increased downforce translates into dangerous turbulence for a car trying to overtake: last year this became a problem when the following car was within one second of the leader, Hamilton says, but this year the distance has doubled. In another interview, the British legend has admitted that drivers experienced the same problem at the Monaco Grand Prix, so he is hoping for some rule changes to that venerable race.

It remains to be seen how Formula 1 authorities will respond to the passing problem, but Australian betting fans can be sure of one thing: this year’s Formula 1 World Championships should provide some ding-dong battles between Mercedes and Ferrari. In track testing in Spain a few weeks ago, the top lap time was set by Raikkonen, but he was only 0.676 seconds faster than the previous best time, set by Bottas a day earlier.