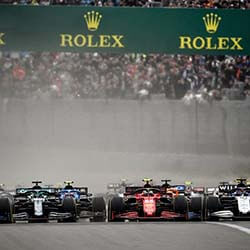 According to an exciting announcement by Sky Sports, fans will this year for the first time ever get to view the 2022 Formula 1 action in High Dynamic Range (HDR).

The broadcaster says it will bring bolder imagery, and sharper viewing pleasures to the sport than in previous years. The announcement marks their latest step in a move to make HDR technology the new standard.

According to Sky Sports MD Jonathan Licht, HDR tech will treat viewers to a more “impactful” experience than what had ever been possible in the past. Sky Sports is the official home to Formula 1 in Ireland as well as in the UK.

Max Verstappen, meanwhile, this week denied the notion that Formula One is in need of “healing” after last season’s controversial final in Abu Dhabi. Verstappen told a leading British news broadcaster that dramatic moments are a natural part of any sport.

Formula 1 is undoubtedly a sport filled with drama, rivalries, and major shake-ups. One driver at the center of much drama right now is Russia’s Nikita Mazepin. Following Russia’s invasion of the Ukraine, team Haas cut all ties with title sponsor Uralkali, as well as with Mazepin.

Verstappen sympathised with Mazepin over how he had lost his place on the 2022 grid and said the Russian had shown himself to have the necessary talent to make his mark in the world of F1.