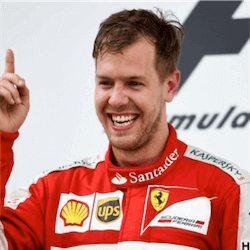 Three races into the 2017 Formula 1 season, Ferrari is clearly challenging three years of Mercedes dominance. The German cars are delivering top lap times in the qualifiers, but the Italians have more pace where it counts: in actual races. Throw in cleverer decisions from the pit-wall, and Ferrari looks like a dangerous contender.

Sunday’s Bahrain Grand Prix in Sakhir was a case in point. Mercedes’ Valtteri Bottas posted the fastest time in qualifiers to take pole position, with Lewis Hamilton right behind him. Ferrari’s Sebastian Vettel started third on the grid, but nevertheless managed to pass both Mercedes drivers and take his second win of the 2017 championship, finishing a full 6.660 seconds ahead of Hamilton.

Admittedly, the British driver was hamstrung by a time penalty after holding up Daniel Ricciardo in the pit lane. So even with teammate Bottas yielding to his quicker pace twice during the later stages, Hamilton was never in a position to mount a serious challenge on Vettel’s lead.

But there’s no ignoring the inspired early pit-stop on lap 11 that allowed Vettel to secure that lead, which he held for the rest of the race. Mercedes are going to have to pull out all the stops against Ferrari in the next 17 races, starting with Sochi’s Russian Grand Prix on 30 April.

Just as they did at the Australian Grand Prix in March, Hamilton finished second and Bottas third at the Bahrain International Circuit on Sunday. In another repeat of the Melbourne race, Ferrari took first and fourth, with Vettel’s teammate Kimi Raikkonen once again finishing behind Bottas, after starting in fifth place, behind Ricciardo on the grid.

Ricciardo’s teammate, Dutch Red Bull driver Max Verstappen was out of luck; brake failure on lap 11 put paid to his Bahrain Grand Prix. However, he wasn’t the only driver let down by his car.

Despite McLaren-Honda releasing Fernando Alonso for the Monaco Grand Prix, so he can pursue his triple-crown dream at the Indy 500, the Spanish driver was not singing his team’s praises on Sunday, after a malfunctioning power unit forced him to retire two laps from the end. Clearly, the McLaren team needs to take a serious look at their cars, if he and teammate Stoffel Vandoorne are to have any hope of dragging them out of last place in the constructors’ championship.