Belgian GP Kicks Off This Weekend 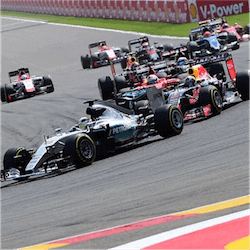 This weekend marks the debut of the new 2017 style F1 car models at the Belgian Grand Prix. The increased downforce of the 2017 spec models will be a welcome feature at the GP since it is such a fast track and tensions are quite high amongst the top tier drivers that could facilitate some high risk racing.

Sergio Perez from Force India has said that the Belgian course is easily one of the best courses to push your car to the limit. Perez and the rest of the field will return to the F1 action this weekend after they had their summer break. The drivers are expected to be refreshed and relaxed heading into this race.

Haas’s Gunther Steiner has announced this week that heading into the Belgian Grand Prix, the team will be making use of Brambo brake kits. The team has been battling with adjusting their braking setup since they debuted in the 2016 season.

The team have swopped between Brembo and Carbon Industries braking kits all season, even going so far as to suggest their drivers Romain Grosjean and Kevin Magnussen may use different kits this weekend.

Another upgrade package for their vehicles will be arriving later this year to help Haas battle up the Constructer Championship rankings. Updates are expected for the US Grand Prix and the Japanese Grand Prix pending further wind tunnel testes by Haas.

Toto Wolff, head of Mercedes Racing has said that he doesn’t think that Ferrari showed their true pace at the Hungarian Grand Prix. The race that preceded the summer break was clinched by Ferrari when they finished in both first and second place.

Vettel and Raikkonen managed to keep the rest of the field at bay despite Vettel battling with a steering problem through much of the second half of the race. Power will be a key factor in determining the winners of the upcoming Belgian Grand Prix due to the fast paced nature of the Spa-Francorchamps circuit.

Below are the current driver rankings along with their current score as we head into the weekend’s Belgian Grand Prix.