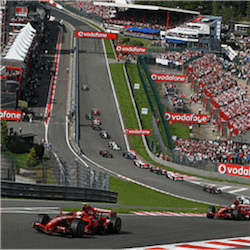 Kicking off on the 27th of August, the Belgian Grand Prix will be the first major race since the drivers took a much needed mid season break.

The event is to be held at the Circuit de Spa-Francorchamps. This will be round 12 of the 2017 season of F1 and at the moment Sebastian Vettel is at the top of the World Drivers’ Championship, 14 points ahead of Lewis Hamilton.

Mercedes is leading the constructor’s championship rankings with an impressive 39 point lead. The 7 km course has a great combination of straights and hairpin turns and will offer a strong challenge to the drivers.

McLaren – Honda have been having a tough time with regards to their technical specs. The team has suffered much due to their lacklustre hardware. In May Fernando Alonso already had enough and was threatening to leave if his concerns regarding the vehicle’s technical specifications were not heard.

Honda has announced now, just ahead of the Belgian Grand Prix, that they have at least 6 upgrades planned for their engine. Weather the upgrades will be in time for the race , what those upgrades will entail and whether the team will pick up any penalties because of it , remains to be seen.

After the Scottish driver filled in for a sick Felipe Massa, Paul di Resta is hoping to make a full time return to F1. The driver was asked to replace the sick Williams driver 2 hours before the race was due to start. Despite being unfamiliar with the car and not practiced on the course, di Resta still finished in 19th place.

Technical officer for Mercedes, Paddy Lowe stated that the team are remaining open minded about recruitment for next season when asked if di Resta will be returning to the fold. At 31 year old, di Resta may be one for the older drivers, but he brings a coolness and maturity to the team as well as a wealth of experience.

At the moment, one of the team’s biggest backers and father of Lance Stroll, Lawrence Stroll, prefers to back Massa as a great trainer for his son, despite Massa saying he wishes to remain in F1 for only one more season.