Bottas Takes The Honours in Austria 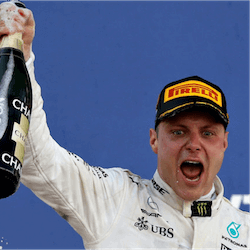 Valterri Bottas has claimed his second win of the season at the Austrian Grand Prix after starting in pole position on Sunday. The Mercedes driver held off an impressive late charge by Ferrari’s Sebastian Vettel who crossed the line just 0.6 seconds behind Bottas. Speaking to the press, Vettel said that he probably needed just one more lap to take Bottas as the Mercedes driver was battling to get up the hill.

Vettel’s second place finish has given him a 20-point championship lead over his main rival Lewis Hamilton who placed fourth. Coming home in third place was Red Bull’s Daniel Ricciardo who defended his position from Hamilton who almost managed to pass the Australian but simply ran out of time. This was Ricciardo’s fifth straight podium finish, which he celebrated with a post-race “shoey”.  Speaking to the press, Ricciardo said that it was a fun race for him. He had a few decisive moments at the start and then the defence challenge on the last couple of laps against Hamilton.

Disappointment for Alonso and Verstappen

For Bottas, this was his second win of the season, putting him just 15 points behind Hamilton in the overall championship standings. Hamilton started the race from 8th position as he picked up a five-place grid penalty for an unauthorised gearbox change at the Azerbaijan Grand Prix. It was a disappointing race for Fernando Alonso who had to retire from the race after he ended up in a collision with Toro Rosso driver Daniil Kvyat.

Max Verstappen, the Red Bull driver also had a difficult race. After picking up a clutch problem, Verstappen dropped to the back of the field where he collided with Alonso’s McLaren, ending his race. This was the fifth time this season that Verstappen failed to finish a race. At the front of the pack, Bottas got a clean getaway with Vettel making an uncharacteristic sluggish start. Vettel originally contested Bottas for having jumped the lights but the Mercedes driver was cleared by the stewards.

Speaking from the podium, Bottas said he had the start of his life. He said he was extremely happy with this his second win of his career. Meanwhile Kimi Raikkonen, came home in fifth place just ahead of Romain Grosjean in sixth and the two Force India drivers Sergio Perez in seventh and Esteban Ocon in eighth. Felipe Massa and Lance Stroll, the two Williams drivers made good starts from the back of the grid to make up the last two places in the top 10.