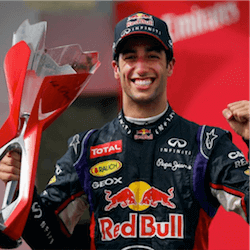 Australian Red Bull Driver Daniel Riccardo recorded his fifth Grand Prix career win after profiting from a chaotic Grand Prix race in Azerbaijan. Valterri Bottas placed second after overtaking the young Canadian Lance Stroll in the closing meters of the race. Meanwhile Sebastian Vettel, who took fourth was able to extend his championship lead over Lewis Hamilton who placed fifth. With eight races down, Vettel holds the lead by 14 points in the championship.

The Azerbaijan Grand Prix was a complete stop-start race with the safely car came out three times in quick succession. Midway through the race, the red flag came out and stopped the Grand Prix due to excessive debris lying on the track. Shortly before the red flag, Hamilton and Vettel were involved in a collision incident that has completely soured their good relations. Driving behind, the safety car, Hamilton was in the lead and appeared to slow down right in front of Vettel.

Vettel then accelerated and came up alongside Hamilton and swerved back into the leader. For his actions, Vettel as handed a 10-second stop-go penalty that dropped him back to fourth place. Meanwhile Hamilton also lost valuable time after stopping to change a loose headrest. Hamilton got back in fifth but was unable o pass Vettel for the remainder of the race.

A Bizarre Race from Start to Finish

The fact that Bottas was able to make his way into second from last place and that Ricciardo eventually won was a testament to how bizarre the race really was. Speaking to the press Bottas said he really enjoyed the race. He was eager to catch Ricciardo but he was just too far away with not enough time left in the race. For 18-year-old Lance Stroll, it was a dream come true. The son of a billionaire faced heavy criticism earlier on in the season and has now recorded his first podium finish. Speaking to the press, Stoll said that he was lost for words. He was disappointed to lose out to Bottas right at the end but was thrilled with the result non-the-less.

After Saturday’s qualifier, Hamilton started the race in pole position; the 66th of his career. Bottas started in second followed by Raikkonen in third and Sebastian Vettel in Forth. While Hamilton got a clean break, Raikkonen clipped Bottas leaving Vettel to leap into second place. Bottas had to make a pit stop on the second lap for a new wing putting him in last place for most of the race.