Ferrari To Not Appeal Penalty 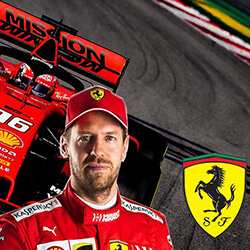 Team Ferrari have made it clear that they will not be pursuing an appeal to the penalty that was handed out to Sebastian Vettel, with many believing that the penalty cost Vettel the win during the latest Grand Prix that took place in Canada.

The German had won on track, but was given a 5 second penalty for dangerous driving, giving the win to his arch rival Lewis Hamilton of Mercedes. A spokesman from Ferrari confirmed that they had decided to move forward from the incident and not to pursue the appeal.

Despite this, Ferrari is still considering whether they should try and overturn the penalty via a right to review. While the rules of Formula 1 state that this kind of penalty is not normally subject to right of appeal, teams are allowed to ask for it to be reviewed if it’s discovered that there are elements to the appeal that weren’t reviewed beforehand.

The timeframe for this take place is only 2 weeks, which gives the team until the end of June to continue with the right to review, but also means that they have until the next race, the French Grand Prix. Ferrari stated that they would appeal against the decision to penalise Vettel for re-joining the track in an unsafe manner that forced Hamilton to make evasive actions.

Vettel re-joined the race but was ultimately handed the penalty that forced him to wait another 5 seconds before he was able to race again.