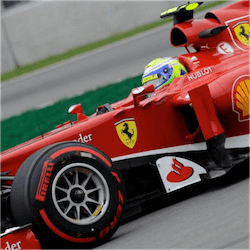 The second race of the 2017 Formula 1 Championship, the Chinese Grand Prix, takes place in Shanghai this Sunday, and Scuderia Ferrari will be chasing a repeat of last month’s Australian Grand Prix win. Ferrari haven’t won back-to-back races in the F1 Championship in seven years, ever since victories in Italy and Singapore by Fernando Alonso in 2010.

Alonso is now driving for McLaren-Honda, but he and teammate Stoffel Vandoorne both had disastrous races last month, so they are unlikely to be a threat this Sunday. Vettel’s teammate, Kimi Raikkonen, finished fourth in Australia, and both Ferrari drivers are capable of securing the elusive double.

The biggest threat to a repeat Ferrari win is the Mercedes team of Lewis Hamilton and Valtteri Bottas. They ended the Melbourne race second and third behind Vettel, and were Ferrari’s closest competitors in last month’s track testing in Spain.

The Chinese Grand Prix, like its Australian counterpart, is held on a street circuit, laid out in the industrial sprawl on the margins of China’s east-coast metropolis. The race comprises 56 laps of the 5.451km circuit, but unlike Melbourne’s Albert Park, the Shanghai course includes some nice long straights.

Hamilton and other drivers have questioned new regulations and the wider cars this year, claiming that increased turbulence is making it impossible for drivers to pass each other. The straights in Shanghai may alleviate this complaint; if not, it will at least drive home the extent of the problem.

Apart from Hamilton and Bottas, Vettel will also have to watch out for Max Verstappen in Shanghai. The young Red Bull ace finished the Australian Grand Prix in fifth place, but his car let him down in terms of grip and power. If the Red Bull-Tag Heuer tech team have ironed out the bugs, he could be a serious threat.

Whether or not the Dutchman can rely on his car, however, the Chinese Grand Prix is going to be close-run and hard-fought. The Vettel-Hamilton tussle looks to be shaping up into a titanic battle for the 2017 championship.