Gearing Up For The 2017 Formula 1 Monaco Grand Prix 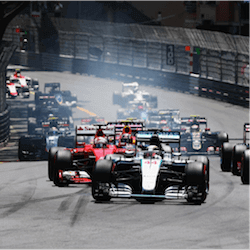 The 2017 FIA Formula One World Championships is already underway with Sebastian Vettel winning the Australian Grand Prix race. For punters and sports fans, Formula 1 provides unadulterated action and massive betting opportunities for both novice and experienced punters. Of all the races on the 2017 calendar, the Monaco Grand Prix stands out as a true test of skill and character.

The Monaco Grand Prix is considered to be one of the best races of the year. It is the one race that ever driver dreams of winning. Along with Le Mans and the Indy 500, Monaco stands as an iconic statement, almost separate from the rest of the racing calendar. To win the Monaco Grand Prix, drivers must display a combination of technical precision and bravery in equal measure. The highly technical race quickly separates the good from the great.

So what makes Monaco stand out from the rest? For starters, the Armco barrier-lined circuit leaves absolutely no margin for error whatsoever. The course demands more concentration and more skill than any other Formula One track on the racing calendar. To add to this, the cars run with huge downforce with the brakes working harder than ever. Because of the design of the track, overtaking is almost impossible. Unlike other races where drivers can make up positions during the race Monaco is largely determined by the qualifying positions.

A True Test of Skill and Bravery

In the race, the Portier corner is considered to be the key to achieving a decent lap time. Just before the Portier corner is the Loews hairpin, the slowest corner in F1 racing. This is then followed by the tunnel and a large flat section of the track. This is where many great drivers have ended their race crashing into the barriers including Michael Schumacher and Ayrton Senna.

The winner of the Monaco Grand Prix will have his named etched alongside Formula 1 greats such as Graham Hill, Michael Schumacher, Alain Prost, Stirling Moss and Jackie Stewart. Currently Ayrton Senna holds the record for the most Monaco wins, claiming the title a total of six times.

The Monaco circuit has changed very little since it was included in the world championships in 1955. In 2004, the track was modified to include an additional pit stop as well as an additional spectator viewing area. The 2017 Monaco Grand Prix kicks off on the 25th of May, a date many sports fans will not want to miss.