Hamilton Takes The Win At US Grand Prix 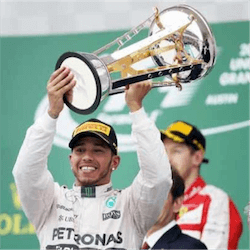 Lewis Hamilton has moved one step closer to claiming his fourth World Championship title after winning the United States Grand Prix on Sunday. Starting in pole position for a record 72nd time, Hamilton lost his advantage at the start but managed to regain the lead and come home ahead of his nearest rival, Sebastian Vettel. This was the fifth time Hamilton has won in Texas while also marking his ninth win this year and his 62nd of his F1 career.

Coming home in second, Sebastian Vettel has just three races left to try and close the gap on Hamilton who now sits 66 points ahead in the driver’s title standings. For Hamilton, all he needs to do is finish anywhere in the top five in Mexico City next weekend and he will claim the championship. Meanwhile, Hamilton’s victory along with a fifth placing finish from teammate Valtteri Bottas has sealed the victory for Mercedes as Constructors champions for 2017. This is the fourth year in a row that Mercedes has won the title.

Mercedes Faster on the Day

Interviewed while on the podium, Hamilton said that he loved the track, adding that it just might be his favourite from now on. As for Vettel, he said that things were looking good at the start but Mercedes were quicker on the day. Max Verstappen came home in third, but a controversial final corner saw his Red Bull run off track. Stewards immediately investigated the move and handed him a five second penalty which meant that third place went to Kimi Riaikkonen.

With Verstappen in fourth, Bottas took fifth while Esteban Ocon took sixth. Carlos Sainz finished in seventh on his debut for Renault while Felipe Massa finished in a disappointing ninth. Despite Hamilton holding pole position, it was actually Vettel who got away first. He managed to open up a full second gap by the end of lap two.

After a bit of reassessing, Hamilton was able to pick up the pace and clock the fastest lap. He caught Vettel by surprise and with the aid of his Drag Reduction System, pull ahead on the straight. Starting from 16th, Max Verstappen made his way up the field to eighth, then sixth while his teammate Daniel Riccardo hit a bit of engine failure which ended his race after just 16 laps.