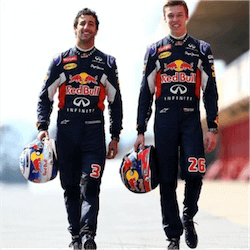 Team Red Bull are currently on a high after their great performance in Baku at the Azerbaijan Grand Prix. They are looking to repeat their success at the upcoming Austria Grand Prix that will be taking place on their home turf. The race is set for the scenic Red Bull Ring in the Styria mountains.

Daniel Riccardio took his 5th Grand Prix win in Baku last month, a season long build up with the driver inching closer and closer to the number one podium finish. The Red Bull Ring should not offer too much of a challenge for team Red Bull’s Renault engines that have caused issues in previous races.

Despite the underpowered engines, Riccardio has made great work of them in the Baku straights, aided by the trimmed wing angles of his car. The Austrian Grand Prix will definitely favour speed over tight cornering meaning that powerful acceleration may not be a race winning factor.

Furthermore the Renault engines have also received upgrades, much to Red Bull’s relief. With improved engine mapping tested out at Baku, the team’s performance improved by 0.2 seconds per lap.

The team has also implemented heightened awareness measures to assist with spotting engine issues before they become race killers as was the case in their previous races leading to very poor performances by their other star driver, Max Verstappen.

Red Bull have not suffered as much, engine wise as the McLaren Honda team who will finally be getting engine upgrades ahead of the Austrian Grand Prix. They may turn out to be the wild card in this race since no one knows what to expect from these upgrades.

Honda announced that they will provide Spec 3 engines for the McLaren drivers. Fernando Alonso and Stoffel Vandoorne will both get the chance to put the upgraded hardware through its paces. The power unit was already tested at the Azerbaijan practice laps by Alonso and the team seems in high spirits.

They opted not to use the upgraded parts since Alonso started at the back of the grid thanks to grid penalties and that engine version not being mapped yet.