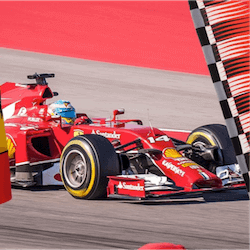 What to Expect at the Italian Grand Prix

This weekend, the European section of the 2017 Formula 1 season comes to and end with the Italian Grand Prix in Monza. With Ferrari losing out to Mercedes in the Belgian Grand Prix, Scuderia will be holding thumbs that the intensely passionate Italian fans will give them the boost they need to pick up their first win since 2010.

While Ferrari have always had a way of finding a bit of extra speed, it must be said that since Michael Schumacher left the Scuderia back in 2006, the team have only racked up one victory in Monza. Sebastian Vettel meanwhile has topped the podium three times in Italy, including the rain-filled 2008 race where he won for Red Bull team Toro Rosso. So, there is hope for them yet.

Mercedes might also have decent chance in Monza. Having found a way round the rulebook, Mercedes will be able to continue to run their engines at a slightly higher burn level compared to the rest of the cars in the field. After Monza, all engines will have to comply with lower burn levels. While Mercedes and Ferrari had a mutual agreement not introduce new engines before Monza, Mercedes changed their mind, much to the chagrin of Ferrari.

Mercedes Look for Another Big Win

Last year, the Italian Grand Prix lived up to its reputation of speed and excitement. After a sloppy start, Lewis Hamilton was quickly passed by his teammate Nico Rosberg who went on to claim an easy win with a massive 15 second gap between the two cars. Hamilton did well to come back from sixth place to come in second just in front of Sebastian Vettel who completed the podium line-up.

The race turned into more of a tactical battle between Ferrari and Mercedes rather than a flat-out speed race. Mercedes chose to make one stop while Ferrari chose to go with a controversial two-stop system, almost managing to put Vettel ahead with their audacious move.