The Latest on the 2017 Spanish Grand Prix 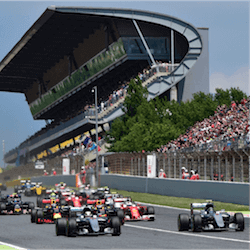 Valtteri Bottas’ recent win at the Russian Grand Prix has proven that 2017 is going to be an interesting Formula 1 season. With the Spanish Grand Prix on the horizon, Sebastian Vettel leads the drivers’ standings ahead of Lewis Hamilton. In Russia, Bottas fought off intense pressure from Vettel to claim his maiden victory for the season. Starting from third place on the grid, Bottas powered past the Ferrari pair and into and early lead. His Mercedes teammate Lewis Hamilton took a disappointing fourth place.

Sebasitan Vettle finished second ahead of Kimi Raikkonen who claimed his first podium finish since last year’s Australian Grand Prix. Sebastian Vettel now leads the driver’s championship, a full 13 points going into the Spanish Grand Prix in Barcelona. So far, Vettel has won two races while Hamilton and Bottas both sit at a single win each. This means that the championship is finely poised with Barcelona next on list.

The 2017 Spanish Grand Prix will take place on Sunday the 14th of May at 1pm. The two practice rounds will take place on the Friday may 12. On Saturday, the third practice will commence as well as the qualifier to determine which driver gets pole position.

What to Expect in Spain

The Circuit de Catalunya in Spain was built in Montmeló in 1991. It was designed to coincide with the Barcelona Olympics and has become one of the most widely used tracks in the world. The track was previously known for its frequent passing. This was mainly due to the fact that drivers would follow each other closely through the last two corners before slipstreaming down straight.

In recent times, the Barcelona track has become a popular testing track with almost every driver gaining an intense familiarly of its various corners and straights. Despite this, the Spanish Grand Prix remains one of the most exciting races of the year. The undulating mix of low and high speed corners combined with the rough track surface creates a lot of wear on the tires and the cars. In Spain, tyre wear is a major factor. This along with the correct setup to cope with the crosswinds can all lead to an intense competition of skill and mental fortitude