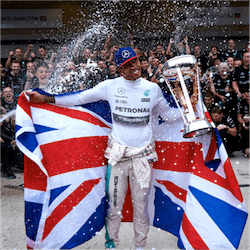 Lewis Hamilton finished in ninth-place at the Mexican Grand Prix, claiming his fourth Formula One driver’s world championship title in the process. In a race that was won by Red Bull’s Max Verstappen, Hamilton’s nearest rival, Sebastian Vettel, needed to finish first or second in order to push the championship to the final race.

Both Hamilton and Vettel had to recover from a chaotic mix-up in on the first lap which saw the Ferrari bump Hamilton on turn three. The result of which caused Hamilton to pull in with a tyre puncture and Vettel with wing damage. Joining the race at the back of the pack, the two point-leaders sped off in a bid to catch up with Max Verstappen who enjoyed the easiest win of his F1 career.

Sebastian Vettel eventually finished fourth while Hamilton finished in ninth, knowing that the Championship was his. With a lead of 56 points, Hamilton has an unassailable lead with a maximum of 50 points up for grabs in the last race of the season. The 2017 championship title makes Hamilton the most decorated British Formula 1 driver in history. His is also only one of five drivers with more than four wins under his belt.

The 2017 Formula One season has seen Hamilton pick up a total of nine wins, not finishing lower than seventh before the Mexican Grand Prix. His Ferrari teammate, Valtteri Bottas finished second in Mexico while Ferrari’s Kimi Raikkonen took third. Daniel Ricciardo had a disappointing race. Starting in 16th, Ricciardo climbed his way up to eighth, before being forced to retire with engine trouble.

With another Championship win in the bag, Hamilton joins the likes of Alain Prost and Vettel as four time four-time winners. He trails only Juan Mauel Fangio with five wins and the legendary Michael Schumacher with seven. Since the adoption of the turbo-hybrid engine in 2014, Hamilton’s Mercedes has dominated. In the last four years alone, Hamilton has won 30 out of his 62 career victories. To put this into perspective, his 62 victories have come from just 77 races.

This year, Hamilton and Mercedes had to chase down the championship after Vettel won two early races. He came back with great resolve, winning five of the last seven races and missing out on just five podium finishes since the start of the season.