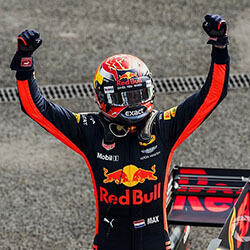 Max Verstappen took the lead position at the Mexican Grand Prix, and celebrated his win alongside rival Lewis Hamilton, who earned his fifth Drivers Champion title of his career.

Verstappen and Hamilton took the lead early on into the race, and worked together to keep poleman Daniel Ricciardo in check. The two maintained their positions until the end of the race, with Verstappen taking the number one spot on the podium, and Hamilton coming in at fourth place.

Verstappen didn’t find too much opposition during his race to the finish, and managed to stay ahead of Ferrari’s Sebastian Vettel and Kimi Raikkonen throughout most of the race. Hamilton, who was not gunning for a place on the podium, focussed on earning enough points to grab his Drivers Title before the end of the season. While he attempted to maintain his pace with Verstappen during the early stages of the race, pressure from Ricciardo saw him slip back into second place until he took a pit stop on lap 11 of 71.

Vettel, who started at fourth place on the grid, dropped down to fifth place as Valtteri Bottas of Mercedes mugged Vettel during Turn 1, but the Ferrari driver fought hard to regain his fourth position at Turns 4 and 5.

Verstappen, who was almost unchallenged throughout most of the event, became worried that he was pushing his car a little too hard, but otherwise went on to claim his second victory of the season so far.