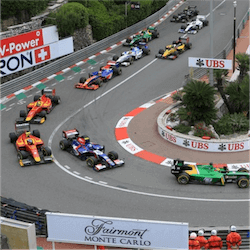 The Monaco Grand Prix on 28 May will attract plenty of New Zealand online sports betting enthusiasts. Even non-motorsport fans enjoy a punt on the classic road race through the tiny Mediterranean principality, as it has become the glamorous pop-culture icon of F1 excitement.

It’s an event that predates the inauguration of the F1 World Championship in 1950. The famous Riviera playground of the wealthy has been blocking off its streets annually since 1929, creating a narrow, twisting, 3.337km circuit that includes tight turns, varying elevations and a tunnel.

The race record is held by Brazilian star Ayrton Senna, who finished first in Monaco six times, five of them consecutively from 1989 to 1993. In the 1960s, British racing legend Graham Hill won the race five times, earning him the nickname ‘Mr Monaco’.

Lewis Hamilton won the Monaco Grand Prix in 2016, and he will be back this year. It was the first Monaco win for the British racing prodigy, who exploded into F1 racing a decade ago at the tender age of 22 and now has a career record of 53 Grand Prix wins.

The win cemented Hamilton’s reputation as one of the all-time greats of Formula 1. His records already include the most career points, established when he won the Austrian Grand Prix last year, and since boosted to 2,247 overall. He was also the youngest driver to lead the World Championship, when he won the 2007 Spanish Grand Prix.

Before 28 May, five other Formula 1 Grands Prix take place around the world, so New Zealand betting fans have several opportunities to see how Hamilton is performing against his rivals.