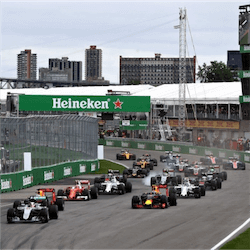 McLaren Honda has accepted their weak season and will find no relief at this weekend’s Azerbaijan Grand Prix to be held in Baku. After the team failed to finish at the Canadian Grand Prix, retiring in last place thanks to some power unit issues, driver Fernando Alonso has resigned himself to receiving more race penalties.

The team fully expects to be saddled with a last place grid start this weekend. They are used to race penalties by now however as they have received many this season due to their car going over its allotted limit if power units. The narrow raceways of Azerbaijan offer very similar track conditions to Monaco meaning overtaking in the race will be a very big challenge.

The Disappointing Season So Far

McLaren Honda is yet to score a single point this season so the mood is quite low currently in the camp. Going from the second most decorated team to being in last place has been a rude awaking for the team and its drivers this year.

A lot of criticism has been directed at supplier Honda from the team stating that they may be looking at other options for the next season as these technical issues have cost the team dearly.

Critics are looking towards Sebastian Vettel from Ferrari and Lewis Hamilton from Mercedes to be the race leaders this weekend. This may be a no brainer for some as the duo has taken all but one of the grand prix events this year.

Vettel has had the best record at this brand new track, with the inaugural race last year giving a second place to the driver. Hamilton on the other hand remembers the race as being plagued with technical issues compounded by a poor qualifying race so we can only guess where his head is at.

The Challenges Of The Track

Fans will be looking out for the now infamous turn 8 that cost Lewis Hamilton his qualifying race after he brushed the tight inner wall.

This year sees a few wider car models that will find impossibly few opportunities for safe overtaking at Baku.

The Azerbaijan Grand Prix ran as the European Grand Prix last year so technically this is the first official year of the race as a part of the annual F1 Calendar. It was a dream of Bernie Ecclestone that has finally come to fruition.