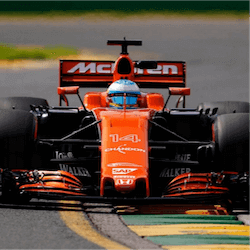 Following their improved performance at the Spanish Grand Prix, McLaren have plans to implement the second part of their major update at this weekend’s Monaco Grand Prix. The first of McLaren’s upgrades helped Fernando Alonso obtain the team’s best qualifying result of the season. Alonso recorded a seventh place on the grid in Spain, however any hopes of gaining the first points for the year were dashed when Alonso clashed with Felipe Massa and ended up in 12 position.

Addressing the press, McLaren’s racing director Eric Boullier said that he had seen definite signs of improved performance in Barcelona. That combined with the data from the team’s wind tunnel and CFD gives Boullier confidence that the next part of the upgrade will perform to his expectations. According to Boullier, McLaren have completely restructured and rebuilt the team car. He believes, you can see the results first hand, with an excellent correlation rate to boot.

In Spain, McLaren brought in a new front wing, new floor, bodywork as well as a new rear wing which all correlated around 95%. With the new regulations in place, teams can expect huge gains every time they work in the wind tunnel or CFD. The director believes that they now have a car that can achieve a top-ten placing purely on merit. He did admit that competing for the lower half of the points was not the ultimate goal though.

What McLaren had on the car in Spain was just the first part of the upgrade package. The second part will be implemented in Monaco. Boullier says that the upgrade will allow Fernando and the team to step up into the midfield pack. The confidence he feels is based on fact and figures. According to him, the team have a definite chance at claiming points on less power sensitive tracks such a Monaco. That being said, the team is not planning on racing to be seventh.

When reviewing the footage of the Spanish Grand Prix, the team can see exactly where Alonso was gaining and where he was losing. It is that three seconds of gain that came as a result of the first upgrade. One step down, the team are eager to put their next upgrade into action with their sights set on more than just seventh place.