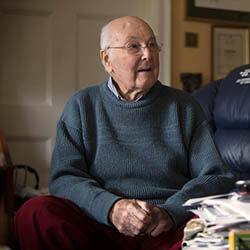 Murray Walker, to many a British Formula 1 fan the undisputable “voice of F1”, has died, aged 97.

Walker entered the Formula 1 broadcasting scene full-time back in 1978, commentating on the sport for England’s national news broadcaster, the BBC. Famously referred to by Clive James as a man in the habit of talking as if his pants were on fire, Walker’s passion was widely known be the result of a true passion and love for the sport, not to mention a genuine desire to convey that passion to fans all over the world.

Walker, following a time spent serving in the British Army during the second world war, started a phenomenal career in broadcasting and advertising. During this time with the BBC, he interviewed countless F1 sporting greats, including Michael Schumacher, Ayrton Senna, Juan Manuel Fangio, and Enzo Ferrari.

The voice of F1 had a particular knack for commentating on a sport often bewildering and complex, especially to newcomers, and in a way that would grip the attention even of the completely uninitiated viewer.

More than just a broadcaster, Walker counted himself – and certainly was – a true entertainer. Since F1 could be experienced as complex and even bordering on the obscure, Walker would famously translate the technical ins and outs of what was happening on the tarmac in a way that would excite the ordinary fan not really interested in diameters and rapid reaction.