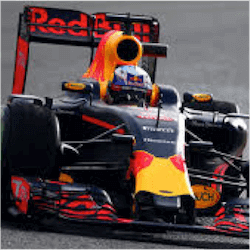 Kicking off on Friday the 25th, the Belgian Formula 1 race is the first major event after the Summer F1 break. Red Bull and McLaren are dead set to launch aggressively into the Grand Prix when their tyre selection was revealed the weekend.

Both teams have opted for 9 of Pirelli’s ultra soft, purple marked tyres. Both Riccardio and Verstappen will have 9 of the ultra soft sets, 3 of Pirellis Red Supersoft sets and 1 set of Yellow Soft tyres.

Mercedes, Force India and Haas have taken similar approached to each other. They have only opted for 6 of the Ultra soft sets, aiming for more conservative racing specs, while Ferrari has taken a middle ground with 7 Ultra soft sets. Lewis Hamilton however has opted for 4 soft, 3 Supersoft and 6 Ultrasoft.

Friday sees 3 sets of practice runs, Saturday features the qualifying race and Sunday sees the main race. This track features a 7km course resulting in an overall race length of 308km. The track record is held by Sebastian Vettel for a time of 1:47.263.

It seems that with all the grandstand tickets sold out and only Friday and Saturday general admittance tickets left, fans can expect a packed house this weekend.  According to Andre Maes, this will be the first time since Michael Schumacher’s attendance in 2001 which resulted in crowds of over 250 000. The same is expected this weekend and it seems thanks to the popularity of Max Verstappen. Credit also goes to the attendance of Stoffel Vandoorne and also in part to the removal of the German GP meaning that the Belgium GP has become even more of a premier event. This course certainly deserves the adoration, since it has hosted Grand Prix events since the 1950’s.

During the British Grand Prix, Vettel regularly complained via team radio that Verstappen was under braking. This was while the two drivers were battling to attain third place. Vettel stated in interviews afterwards that Verstappen will need to be “better behaved” while he drives defensively.

Verstappen however recalled Vettel’s 9 disciplinary points so far along with his deliberate recent crash into Hamilton and stated that he does not think that Vettel should be listened to. If Vettel has moved his wrath from Hamilton to Verstappen, Red Bull could soon have problems on their hands.