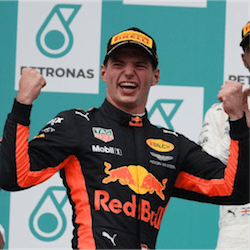 Red Bull’s Max Verstappen recorded an impressive win at the Malaysian Grand Prix this past weekend. Lewis Hamilton finished in second, extending his championship lead over rival Sebastian Vettel. After struggling with engine problems in the qualifiers, Vettel did well to come from the back of the grid to finish in fourth, keeping his hopes alive for a 2017 title. With just five races to go, the German is now 34 points behind Hamilton with a maximum of 125 points up for grabs.

For his part, Hamilton expressed concerns about the pace of his car but was pleased to extend his overall lead in what has been a difficult week for Mercedes. For race winner Max Verstappen, it was an easy affair. Verstappen has had a difficult season with a couple of big finishes but reliability problems and driver errors kept him off the podium. With Raikkonen out of the picture, the 20-year-old Dutchman successfully fended off an attack by Valtteri Bottas on the first corner before passing Hamilton down the inside on the start of lap four.

Verstappen managed pull away from Hamilton, quickly building up a seven-second lead. He remained in control for the rest of the race despite reporting problems with his neck muscles in the closing stages. With Verstappen way out ahead, Hamilton was left to measure his gap against Daniel Ricciardo and Vettel behind him. Hamilton was warned that Vettel could have been a threat on the final set of laps but the Ferrari driver as left with too much to do.

With 10 laps to go, Vettel was on Ricciardo’s tail but the Red Bull driver was able to hold him off, forcing Vettel to fall back with shot front tires. The spirited fight back from Vettel eased some of the pain in the Ferrari camp as they looked back on what could have been a one-two finish if engine problems have not hit both cars. Raikkonen, who qualified in second, was keen to challenge for the win but didn’t even make it to the start line. His car lost power on the way to the grid and was wheeled into the garage, retiring him for the race.

Mercedes Valiteri Bottas also had a poor race, taking fifth place, a full 45 seconds behind his teammate. The disappointing result for the Finn followed a weak qualifying performance leading many people to wonder where his pace has gone after he returned from the summer break.